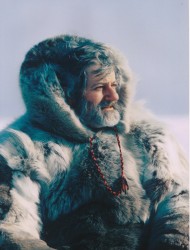 One of the traditional stories the great anthropologist Franz Boas collected on his journey to Baffin Island in 1883 tells of a giantess who killed whales and bears and who took an Inuk man for a husband.

While she slept, his job was to stay alert and once he awoke her to warn of a bear approaching that was so big it blotted out the water between two islands. She arose, placed her diminutive husband in her boot so he wouldn’t be left behind, and strode after the huge bear, which she killed for food.

“They had no house, but they lived on the land, the sky being their roof,”

Boas wrote in retelling the story of the giantess and her husband.

One day travelling along the Arctic coast in Bathurst Inlet, I came across a camp of several tents that was empty except for an ancient woman who sat carving a piece of bone. An old .30-30 Winchester lay beside her on a blanket.

The Inuk companion I was with spoke to her in the lilting Inuktitut language of the Eastern and Central Arctic, which to me always sounds like the human voice trying to mimic a stream running over stones. Her family was out hunting, she explained to him, and she had stayed behind in case a bear came to camp. Her job was to kill it so it didn’t get their food cache.

She said a barren lands grizzly had come by a day earlier but she had missed the shot and was awaiting its return. She said this in the same matter-of-fact way someone in a southern city might explain they were waiting at home for a letter to arrive.

Through the translator I asked how old she was (58, though she looked 100) and where she was from, thinking she might come from one of the small, isolated hamlets that I had visited in the floatplane we were using to skip along the coast.

She looked out over the barrens and waved her hand gently, gesturing to the rocky landscape stained orange by lichens and softened by the gray green smudge of Caribou moss.

“She was born in a hunting camp. Somewhere out there,” said the translator referring to the sweeping landscape where muskox huddled against cold winds, wolves ran in packs of 30 and Inuit families still depended on caribou meat to survive. “She doesn’t know exactly where.”

So she was born on the land, the sky was her roof -  and like the giantess of legend, she was waiting to kill a bear. The Arctic is a vast landscape scattered with bleached bones, where myth and reality exist together and where ancient routes are marked by silent stone figures known as inuksuit.

Ken Kirkby was lucky enough as a young man to spend five years in the 1960’s travelling in the Arctic. He was then an emerging artist looking for adventure and perhaps more importantly, for himself. He found both.

The story he tells is that one day walking alone across the barrens he saw another person in the distance, but when he drew close found it was just a pile of rocks. They weren’t lying in a natural state but had been stacked in the shape of a human figure. It was brooding, Shamanistic and somehow comforting. It cast a spell on him.

Inuksuit, which is the plural for inuksuk, can be found all across the Arctic, from Alaska to Greenland. Some are built with small windows, framed spaces which, when you look through them, reveal a good hunting or fishing spot.

In some places they run out across the landscape like markers on a trail. In the blowing snow, when everything is the same, they are the signposts home.

In some places they are gathered in groups, as if they have come trudging in from distant lands for an inuksuit conference. At Enukso Point, on Foxe Peninsula, Baffin Island, there are over 100 inuksuit.

Some are ancient, with one on Baffin Island estimated to be at least 1,000 years old. When it was built, the Danes controlled England; Leif Ericson was just discovering Vinland and Sir John Franklin’s ships wouldn’t get lost in the Arctic for another 850 years.

Although they all look old, some inuksuit are contemporary, because modern Inuit still build them, setting them up as pieces of art on the land or to tell their own stories about fishing and hunting. They all have different meaning but they all say the same thing:  We were here.

When Ken left the Artic the images of those stone figures stayed with him long after he was back in the soft confines of the South, and for many years they were just about all that he could paint. The land had been his home, the sky his roof and he somehow had to find a way to tell Canadians how profound that was.

In 1992 he unveiled his big Artic painting, Isumataq, in Canadian Parliament marking the start of a growing awareness in the nation about the importance of the Arctic and helping to establish the inuksuk as a national symbol.

The inuksuk really entered pop culture when it was featured on the quarter in 1992 and on Canada Post stamps in 2000 and 2005. In 2010 its journey from the barren lands to the height of Canadian awareness reached an apogee when an inuksuk became the logo for the winter Olympics in Vancouver.

But while visually arresting, the inuksuk as an image featured on stamps, currency and sports regalia, lacks the powerful magic it has in the context of the windswept tundra, where wolf packs skirt it nervously and cantering caribou allow themselves to be herded by the silent figures towards old killing grounds.

In North, Ken Kirkby returns to the roots of his obsession in an attempt to recapture the darkness and the light cast by inuksuit. The stone figures that he met on the barrens are still out there, beckoning him and other travellers to continue their journeys.

Click on image to display larger version,
then use slideshow controls at the top of the page.
Back to Top